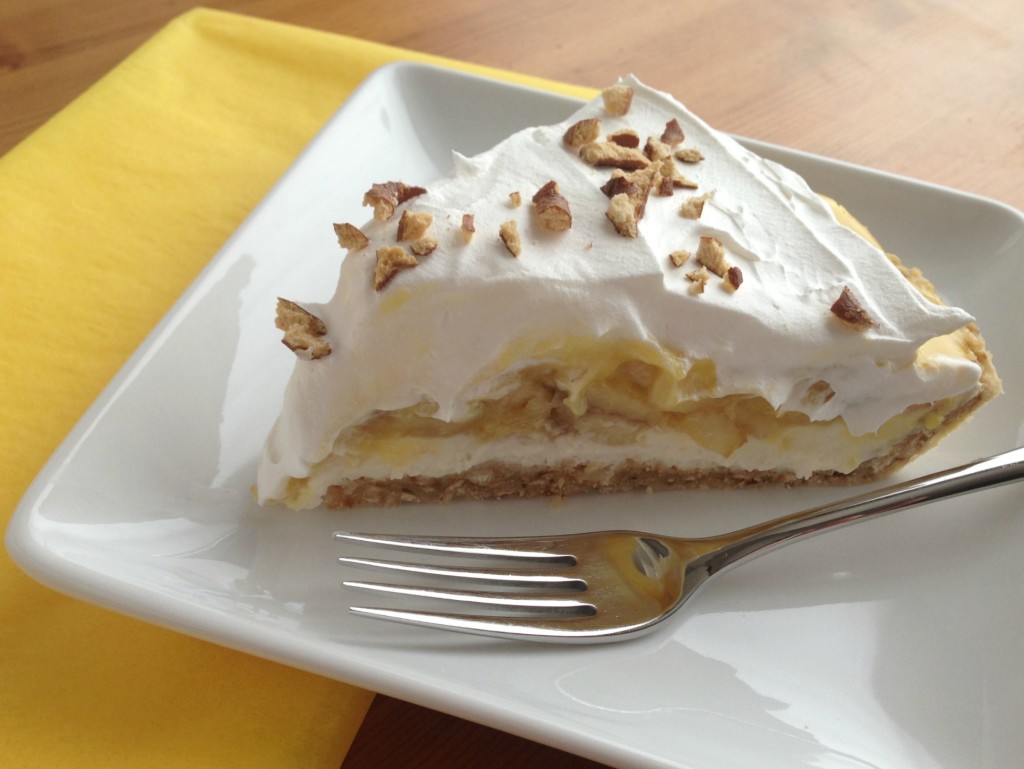 It’s a known fact that I do not like pie.  However, I carved out so many exceptions over the years that it hardly qualifies as a “fact” anymore.  I think it’s more “I don’t like fruit pies” and “I don’t like ‘pie-crusty’ pie crust”.  After all, I make two pies that I absolutely love – German Sweet Chocolate Pie (recipe will magically appear here someday!) and Banana Cream Pie with Pretzel Crust.  Plus I’ll eat at least the filling (if the crust is too “pie-crusty”) of almost any chocolate/peanut butter/”whatever” cream pie.  What do I love about these pies?  There’s no gooey fake-feeling (even if they’re real) fruits, and the crusts are made of things I like (my German Sweet Chocolate Pie has a homemade graham cracker crust and this banana cream pie has a pretzel crust–which just makes me want to make pie crusts out of all the random crunchy items in my pantry!  Goldfish crust anyone?  Just kidding…) 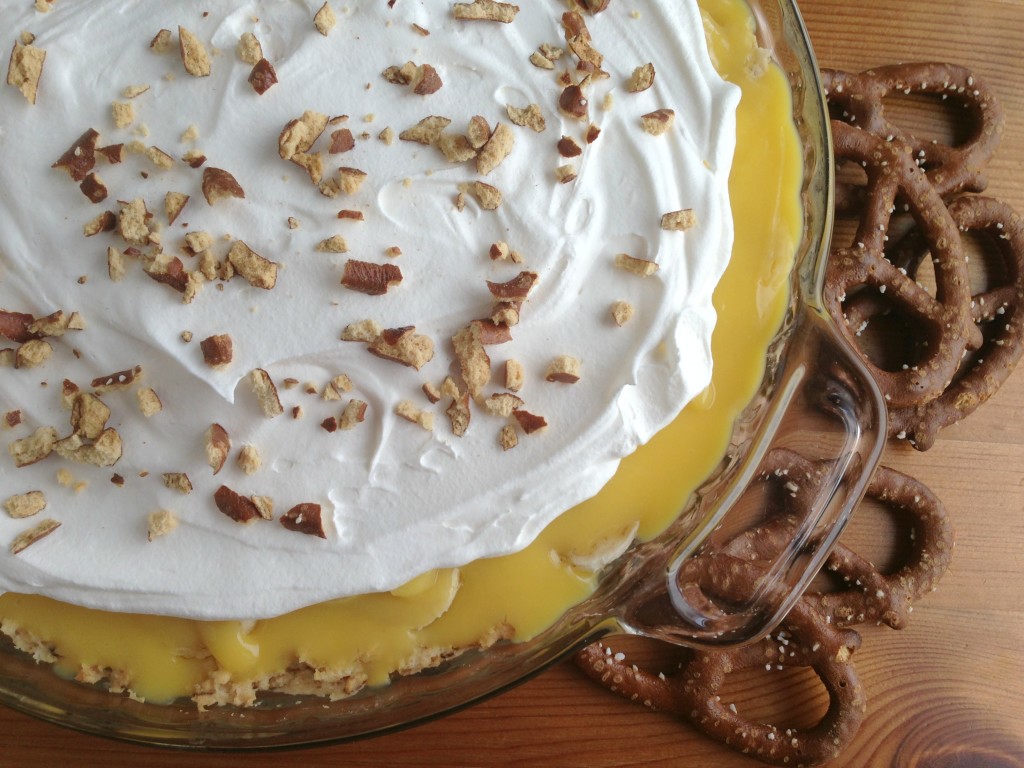 Now don’t be fooled by the name – the only banana that appears in this pie is actually sliced bananas in the middle layer.  There’s no banana flavoring anywhere else.  I feel a little sneaky passing it off as a “banana cream” pie when there’s no banana flavor in the cream layer, but then I take a bite of pie and I don’t care anymore.  If you want more pronounced banana flavor, I’m sure you could use banana cream flavored pudding (which I saw in the pudding aisle) or add a teaspoon of banana extract to the cream cheese mixture.  I haven’t tried either of these variations though (because I love this pie as is) but I’d love to hear about it if you try it! 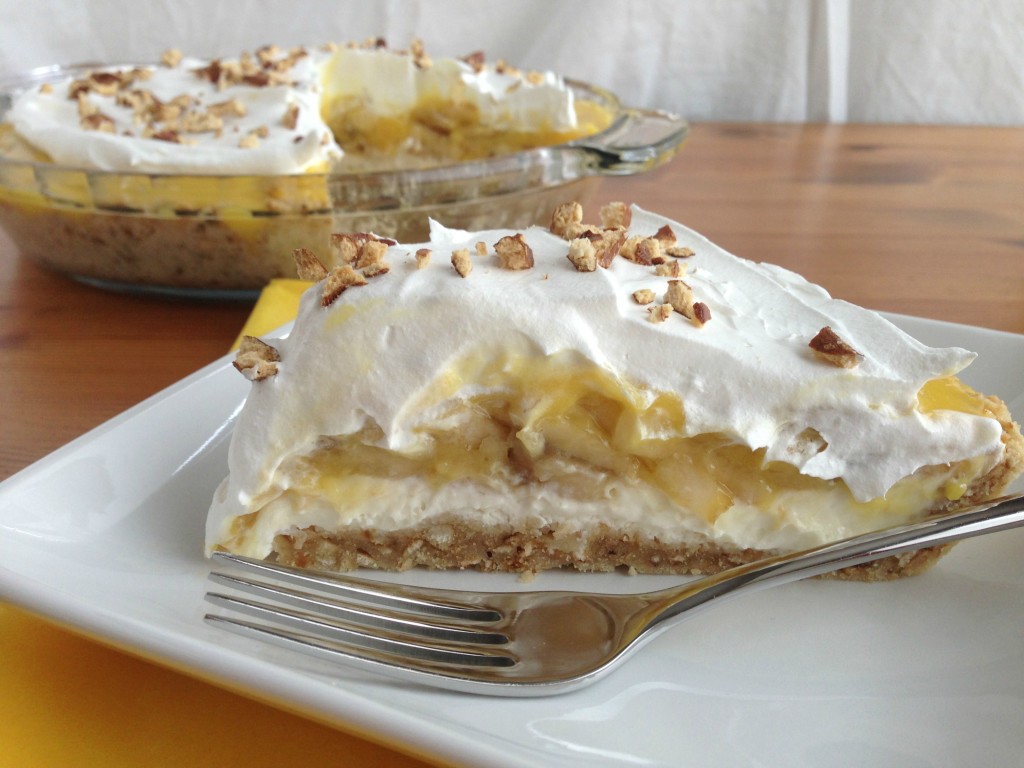 This banana cream pie is very easy to make, and the saltiness of the pretzel crust really complements the bananas and overall sweetness of the other ingredients.  My only complaint about the recipe is that it’s hard to transport once fully assembled, because the Cool Whip top layer is higher than my pie plate, making it hard to cover with plastic wrap.  What I usually do if I am bringing this somewhere is stop assembling after the pudding layer, then add the Cool Whip and garnish when I arrive at my destination.  It takes 2 seconds.  No biggie. 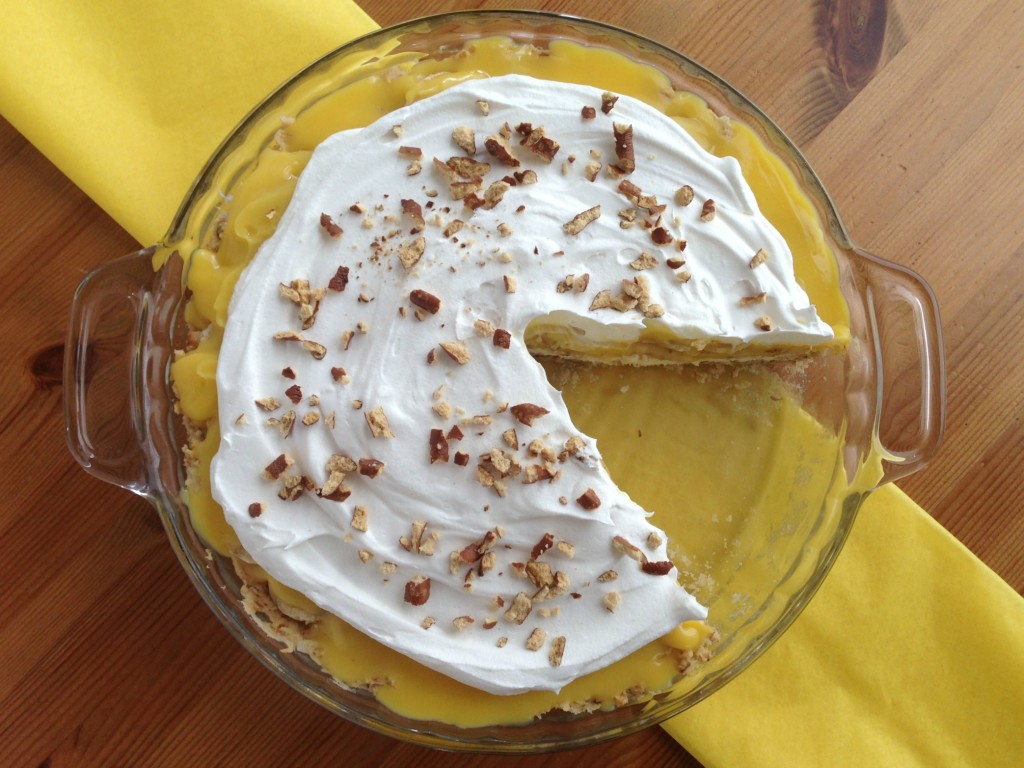 You can also use this recipe to make miniature banana cream pies for a picnic or party.  Just spray muffin tins with cooking spray then divide the pretzel crust dough evenly into the muffin cups, using your fingers to spread the dough onto the bottoms and sides of each muffin cup (it doesn’t need to go all the way up the sides, just enough to form a “cup”).  Poke the crusts with a fork and bake.  I can’t remember how long I baked them for, so start checking at 8 minutes to see if the crusts are done.  Carefully remove each miniature crust from the muffin tin and allow to cool completely.  Place each mini crust into a muffin/cupcake liner then divide the fillings evenly among the mini crusts, following the layering instructions in the recipe.  A little more labor intensive than making one pie, but worth it for a picnic or party where guests may be nibbling on dessert while milling around or may want to sample more than one dessert.   I think I got 18 mini banana cream pies from this recipe…but don’t quote me. 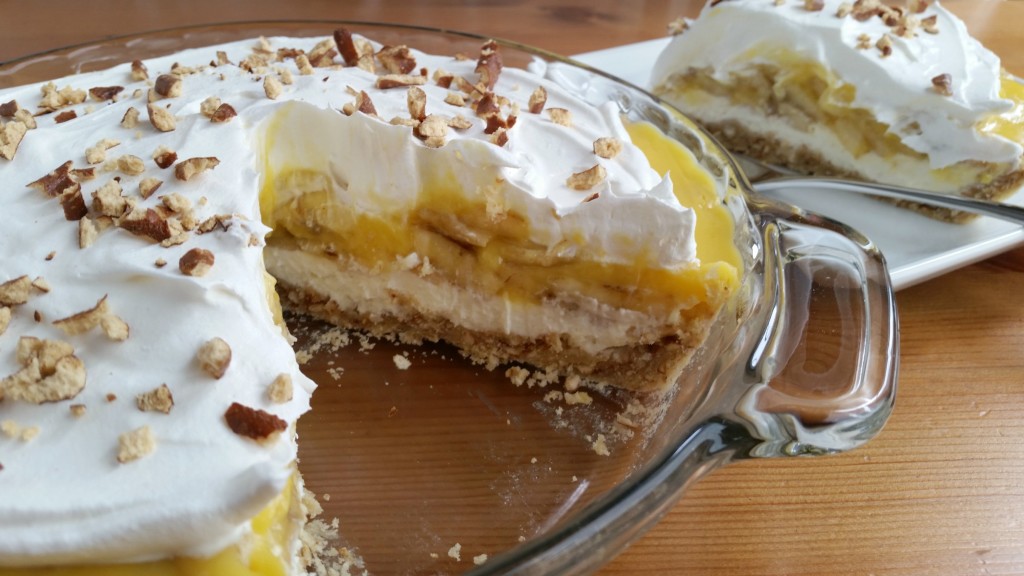 Confession time:  I ate this entire pie by myself.  Yes, I’m pregnant.  And yes, I ate it over the course of 8 days.  But that didn’t make it any less humorous when my husband said to me, “I’m not judging you, but did you eat that whole pie?”  Yes.  Yes I did.

For the Crust
For the Filling

I’ve said it before and I’ll say it again – use full-fat ingredients when baking! I’m always tempted to buy the 1/3 less fat cream cheese or fat free Cool Whip or sugar free pudding. Don’t do it! Bake with the real stuff. It’s all ok in moderation.

You might not use all the cream cheese mixture, pudding or Cool Whip. That's ok - they can be eaten on their own as a delicious treat!

I would eat cake for breakfast every day if it was socially acceptable. I also have a serious M&M problem. Hungry for more?